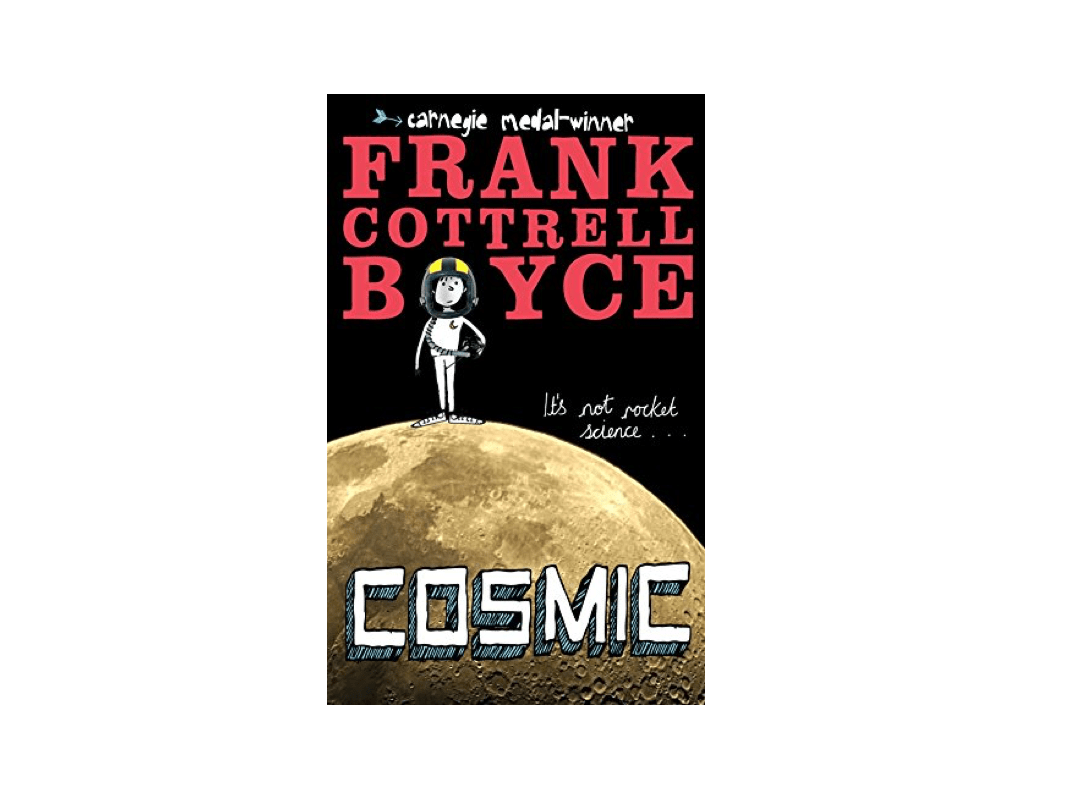 As well as writing middle grade fiction, I also teach in a university Creative Writing dept. I am lucky enough to be a specialist in writing for young people. I have a badge that has the word ‘lecturer’ on it, which, considering my love of fart jokes, always makes me feel I’m in Freaky Friday and someone is about to ask me to leave.

Still. While I’m there, using the electric stapler and mucking about with the paper guillotine, one of the skills I try to impart to my students is to identify the mechanics of a piece of writing they admire: to read like a writer. So, I thought for my first blog post, I’d demonstrate this idea. Inspiration for this has come from posts by both Emma Darwin and Anne Rooney. I do think it’s a helpful way for writers to improve, whether they are first year undergrads, or Carnegie winners.

So, speaking of Carnegie winners, here’s the opening passage from Cosmic by Frank Cottrell Boyce:

i am not exactly in the lake district

Mum, Dad – if you’re listening – you know I said I was going to the South Lakeland Outdoor Activity Centre with the school?

To be completely honest, I’m not exactly in the Lake District.

To be completely honest, I’m more sort of in space.

I’m on this rocket, the Infinite Possibility. I’m about two hundred thousand miles above the surface of the Eath. I’m all right…ish.

The first thing I notice is the lower case chapter heading. This stylistic choice to ignore the rules sets the tone for the passage to follow. The ‘error’ is childish. We are dealing with a character whose youth leads then to make mistakes.

Writing How-Tos always stress the importance of the first line of your novel. It has so much work to do. Mostly it has to draw a reader into the world of the story, to make them feel that this will be a place worth spending time in. The first line here is addressed to absent parents (that poignant ‘if you’re listening’). We can deduce from the chapter heading that it is someone young, or vulnerable, making this address. What could tug on the reader’s heartstrings more than a child alone? We are pre-disposed to be sympathetic.

The opening line also speaks to one of the major themes of the novel i.e. what makes a good dad? (the implied answer here is ‘one who is listening’. The merest hint of a suggestion of the opening words of the Lord’s Prayer add further resonance).

The sentence is in first person, present tense. It’s proper tense! (apologies). Whatever error of judgement this character has made, the effects are being felt by them right-now-this-minute. There isn’t the reassuring sense, so casually implied by a past tense, that all was ultimately well for the character.

And what parent/carer hasn’t heard that cadence from a child ‘you know I said…?’ Not only does this confessional sentence create an impression of guilty youth, but also it sets up a feeling of suspense for the reader – what is the lie that was told? What are its implications and consequences? Conflict is at the heart of plot, and a good lie being revealed is weighty with conflict.

The next two sentences use a rhetorical device, anaphora, where the same words are repeated at the start of successive sentences: ‘To be completely honest…’. This both emphasises the point being made, but, furthermore, it elides into humour, as the ‘completely’ is then contradicted by ‘not exactly’ and ‘sort of’. It’s a use of irony that Alanis Morrisette would have been proud of.

The irony has a further effect of allowing the reader to suspend their disbelief for a while. Is he serious? Is this a joke? Is the boy really in space? As long as the facts themselves are presented ironically, we don’t have to decide straight away – we are given time to get used to the idea.

The next sentences are all ‘tell’, a direct report of events, after the fact – something writers are warned off very often. Here it serves to ground the reader. The ambiguity of the ironic statement is gone, and that ‘I’m all right…ish’ takes us back to the vulnerable character who makes mistakes who we met in the chapter heading.

A few simple sentences that ease us into the world of the story, letting us get comfy, before putting a few stark facts in front of us. Then, before we can say ‘In space? Hang on a minute…’ we are distracted by the voice of a vulnerable young person trying to sound brave.

To those who have a work in progress on the go, who are thinking, ‘What?! I don’t do any of this stuff!’ I’d say that I’d be surprised if Frank Cottrell Boyce does either. At least in the first draft. Much of the mechanics of writing simply spring, unbidden, from who knows where, presenting themselves like gifts to the unsuspecting writer. But I also think that if you know they exist, they might spring unbidden a bit more regularly.

Five Children On the Western Front - A Literary Dissection →