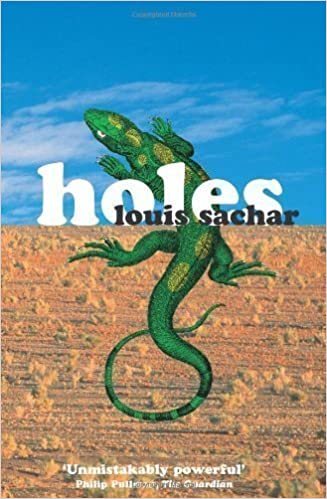 Holes by Louis Sachar may be the perfect book. It is a historical novel, it’s magic-realist and it’s urban contemporary. It is about racism, love, greed, betrayal and onions. It is a farce, a tragedy and a myth. It should – on paper – be so overstuffed that it becomes a hot mess, but instead it is a wise and beautiful work whose layers unfurl in surprising petals.

But, in this Book Dissection, I’m not going to look at its perfect structure (a glorious midpoint reversal happens when a significant new character is introduced on the central page). I shan’t talk about its nested plotlines, which so cleverly echo the theme of inherited guilt. I won’t even talk about the characters – Stanley and Zero and Kissin’ Kate Barlow – who are all gorgeously wrought.

Instead, I’m just going to talk about one sentence from the first page of the novel. In Chapter 1, Sachar introduces the setting, the barren desert landscape of Camp Green Lake. In the middle of a sensory description of place, we are told:

“The warden owns the shade.”

This is the single sentence I intend to dissect.

Say it out loud. And again. Let the vowels stretch your lips, first into a tight purse, then into a wide grimace. Hear the sounds before you think about the meaning at all. In my accent, the clipped ‘the’ sounds like a high-hat, beating between the longer snare-drum sounds of ‘war’ and ‘shade’. The sentence has a rhythm – a military tattoo of beats.

The sounds are melodic too. There are two broadly repeating sounds within the sentence – two instances of parachesis (the umbrella term for the family which includes alliteration, sibilance and consonance). The voiced fricative ‘The’ paired with the voiced plosive ‘den’ and ‘shade’ gives us a tonal shift. Although both ‘warden’ and ‘owns’ are spelled with a ‘w’, it isn’t the same sound; it is inverted: ‘wah’ becomes ‘oh’ in an opening and closing of the note. So, there is song as well as beat.

I know I’ve focused so far on the noise the sentence makes, rather than on its meaning, but I’m still not quite ready to discuss the content.

I think it’s interesting to look a little bit at the etymology of these words and the affect that has on sound. The words are all of proto-Germanic origin, with their deeper roots in Proto-Indo-European. That is to say they are old. Like, really old. 5000 years old. The neat thing about proto-Germanic words is that they tend to be monosyllabic with vowel sounds that have been milled and threshed and beaten and bent so that there’s a whole range of vowel sounds used in short bursts. If you write using them, you’ll get all this lovely rhythm and melody almost as a by-product. Of course, none of us look up the history of words before we write a sentence. But if you use a lot of monosyllables, they will come with a particular sort of music, as we see in this sentence – polysyllabic writing has a different music.

I’m still not quite ready to discuss the content.

I want to talk about the shape of the sentence. It is short. It follows a very natural pattern in Standard English of ‘subject, verb, object.’ It’s clean, with no subclauses, no adverbs, no adjectives. It’s only five words: article (the); noun (warden); verb (owns); article (the); noun (shade). It’s almost as stripped back as English can be. It recalls the structure of our earliest reading material, ‘the cat sat on the mat’ (though that sentence is made more complicated by the addition of a preposition (on)!). To me, the combination of the basic structure, the strong rhythm and the melody creates a solidity to the sentence; it becomes something that echoes with ancient truth.

So, now I’m ready to talk about the content.

“The warden owns the shade.”

What is the ancient truth spoken by this sentence? Well, it tells us that a powerful someone owns something that cannot usually be owned. This surprising fact is world-building.

This is a landscape where shade is valuable. It is hot, dusty, parched – the sun can be a killer if the inhabitants aren’t careful. However, this isn’t an egalitarian space where valuable commodities are shared. Shade isn’t a natural boon, a gift like light and air and water available to all living beings. It has been turned into something you can ‘own’. What a compelling choice of word. Sachar might have said the warden ‘kept the shade to herself’ (for the warden is a she), or he might have written that the warden ‘sat in’ the shade. The choice of ‘owns’ turns nature into property, turns natural resources into private resources.  This is a world where the power of life and death can be owned by a single character – the warden. This is feudal system where the inhabitants must bend to the will of the one person with power.

Sound, setting, ancient truths and vivid world-building are all present in those five short words. For my money, it is a perfect sentence on the first page of a perfect book.