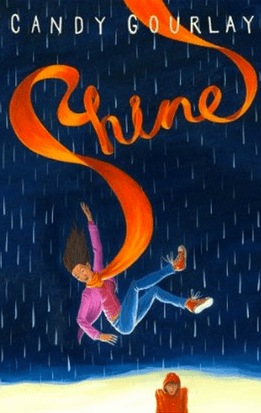 A little while ago I managed to insult Candy Gourlay. It wasn’t deliberate, she’s too lovely. But during a fast and frenetic twitter chat (#ukmgchat) with Candy as the guest of honour, I said something like ‘who in their right mind would write MG in second person?’… and Candy raised her hand.

Intrigued by the notion, I sought out Shine, a book written in second person for middle grade readers. Second person refers to the second person pronoun ‘you’ (first person is ‘I’, third person is ‘he’, ‘she, ‘they’’). Very few books are written using this form. Partly, it’s to do with convention, but also it’s quite a disturbing form, implicating the reader in the action, maybe even telling the reader how to feel.

So, here’s a section of the text from Shine for us to consider:

‘You stumble on the broken promenade. Your breath is coming in gasps and I can hear the thump thump of your heart. You’ve been running.

It’s a beautiful day. The sky is high and not too wet, the sea is broad, the sand white and untrodden, and the mountain gazes greenly over everything like a contented matriarch at the end of a long family table.’

There is a spectrum of options available to a writer using second person. An epistolary novel might use ‘you’ in the context of letters, not implicating the reader at all. Or, at the other end of the spectrum, the reader might be entirely implicated, a little like a text-based role-player video game (the first chapters of Half Bad by Sally Green are an example of this)

Candy’s version is closer to the epistolary model – the ‘you’ character is identified at a certain point in the novel. But there is a very interesting interplay at work between the ‘you’ character and the narrator who is observing them. The narrator appears to have an omniscient point of view. Look at the opening sentences. The narrator sees stumbling, hears gasps, but can even hear the beat of the runner’s heart. Notice how emphatically they are observing, ‘you stumble’, ‘your breath’, ‘you’ve been’, repetition almost to the point of anaphora. ‘You’ is pinned under a microscope. The boundaries between the observed and the observer are thin, and the narrator inhabits the liminal space between them.

But the narrator also has breadth of vision. The scene pans out to take in the sky, the sea, the mountain, and the ‘you’ is lost for a while as the narrator scans the wider scene.

I won’t tell you who the narrator is, as that would be a spoiler, but I will say that this tension between the narrator, and the ‘you’ character is a tension which beautifully mirrors the plot.

The setting also provide an interesting device, helping to define both these slightly shadowy characters. ‘You’ is positioned on a broken promenade. I often advise my students to use the setting in order to describe their characters, and that adjective ‘broken’ might equally apply to the running figure, coming so closely after ‘stumble’.

The narrator, on the other hand, has the bucolic vision of the sky and the mountain attached to them. It’s an idyllic vision. And, again without spoilers, suits the narrator well. There’s a delicate word choice given to the narrator ‘untrodden’. It suggests solitude, but not loneliness. It also counterbalances nicely with the ‘running’ done by ‘you’. The subtle implication is that ‘you’ is more physically present, more aggressive, while the narrator is more ethereal.

Finally, it’s worth noting the metaphor, ‘the mountain gazes greenly over everything like a contented matriarch at the end of a long family table’. Mothers and maternal protection are a strong theme in the novel. Here the mountain is personified, by the narrator, as a mother. It’s a satisfying detail for the reader to enjoy.

I hope that this close reading of an assured second person story goes some way towards erasing my faux pas. Candy proves it’s not such a crazy stylistic idea after all!

This post was first published on the MG Strikes Back blog.